One day the fossil fuel engine is replaced by electric motors, coal power plants are upgraded to regenerative energies – and also the food industry will change permanently. One approach that will play an important role in this field is „tech food“. Startups and companies are researching ways to use technology to reduce resources in food production, to establish new crops as sources of protein or to lower food waste through digital networking. Some tech-food approaches seem like visions from a science fiction story – and yet they are already part of our present: Protein-rich microalgae are cultivated in kilometer-long glass tubes, producing a hundred times more biomass than conventional grain fields. Pilot projects exist in which people take part of their diet intravenously, and an insect larva is being cultivated that could revolutionize existing food cycles. Food Sync gives insight into this tech scene and underlines that not only Silicon Valley but also European companies can do technological pioneering work. 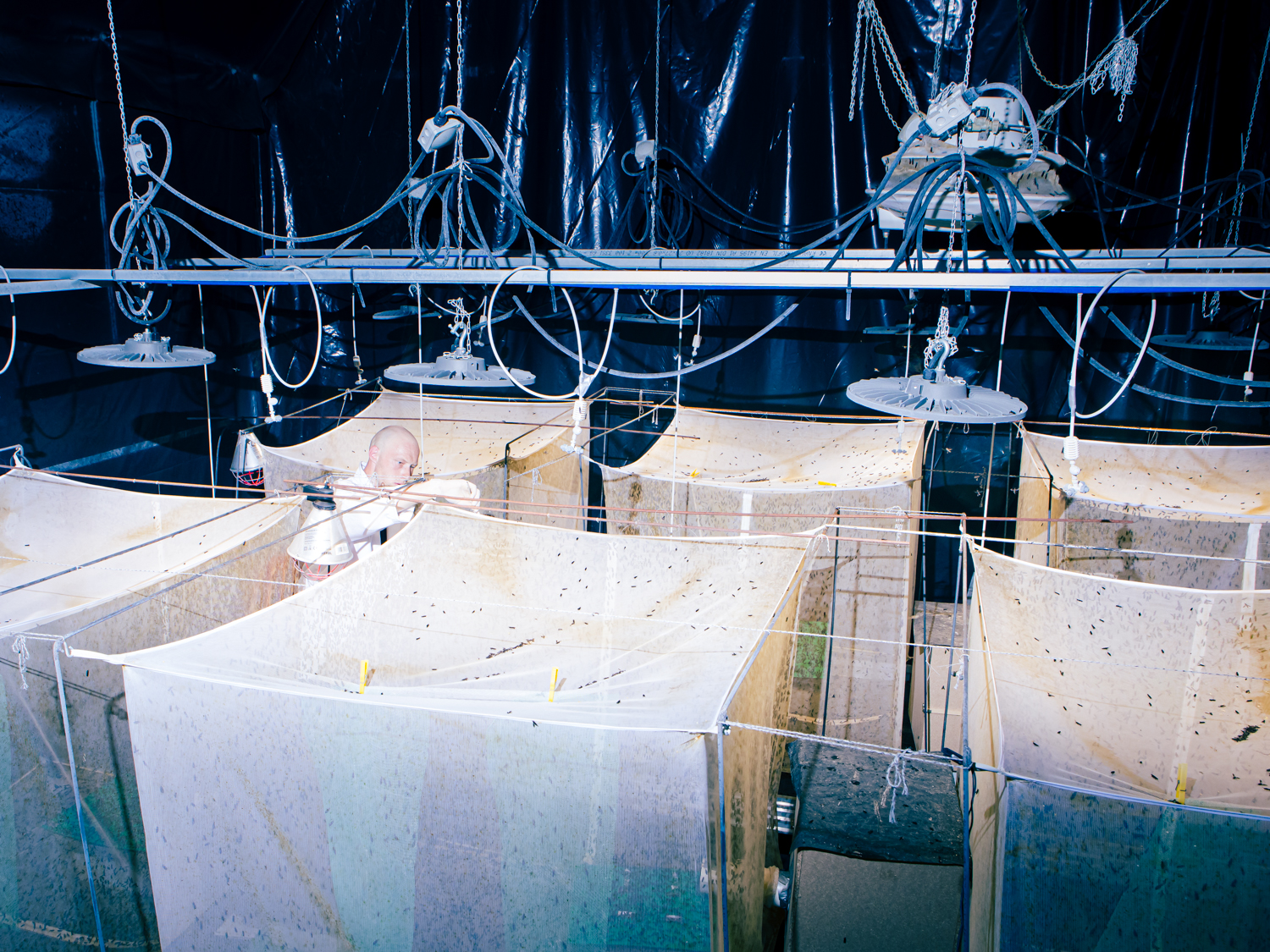 Insects as an alternative source of protein
The breeding cages of the black soldier fly are shielded from light. In this installation, scientists are testing whether the breeding and mating behavior of the animals is altered by different wavelengths of light. 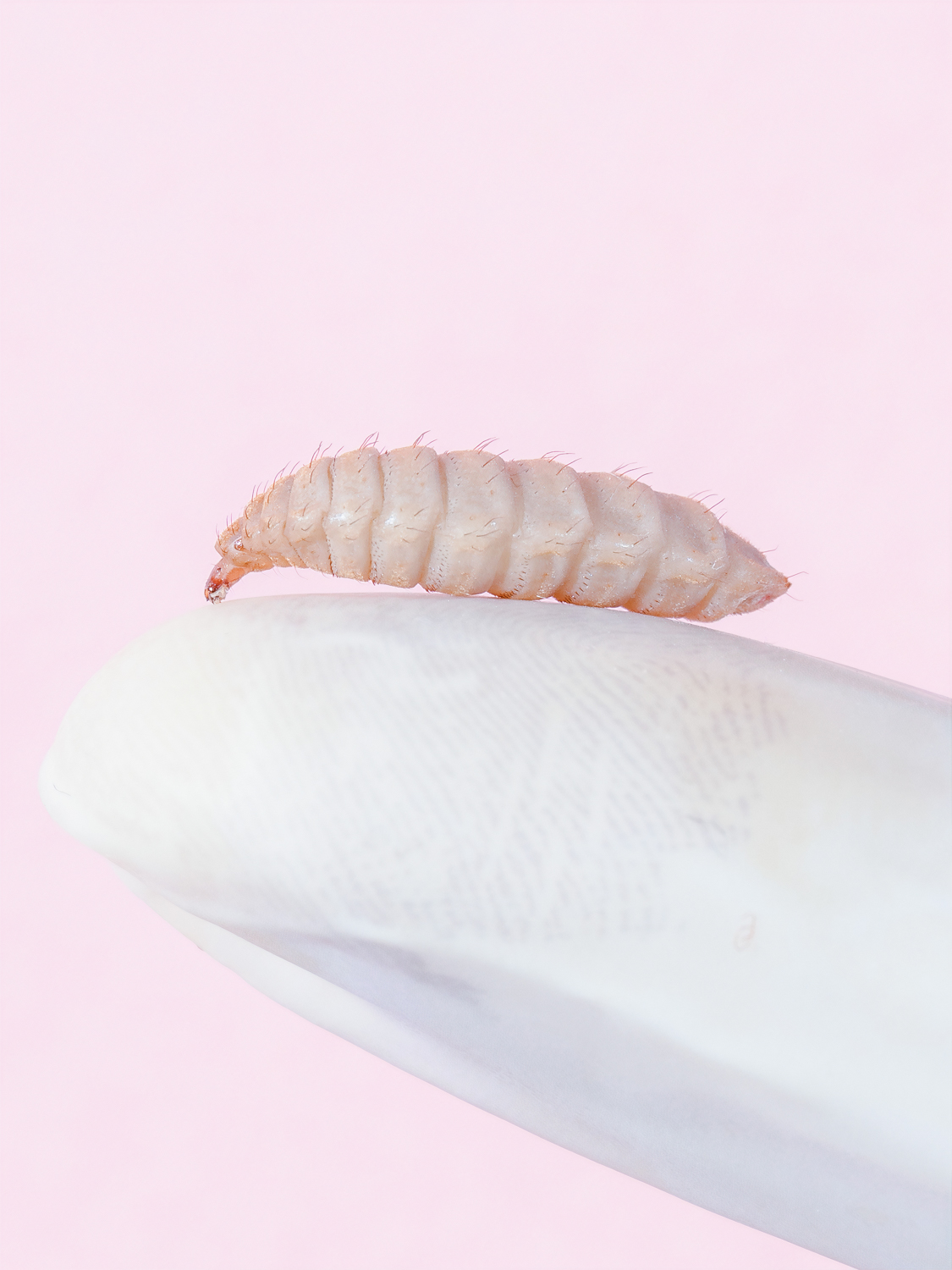 Insects as an alternative source of protein
The larva of the black soldier fly has a unique metabolism. It can feed on any biological product. If bred on a large scale, the larva can help to convert food waste from private households or supermarkets into high-quality animal proteins. These in turn can be used by humans or animals as a food source. 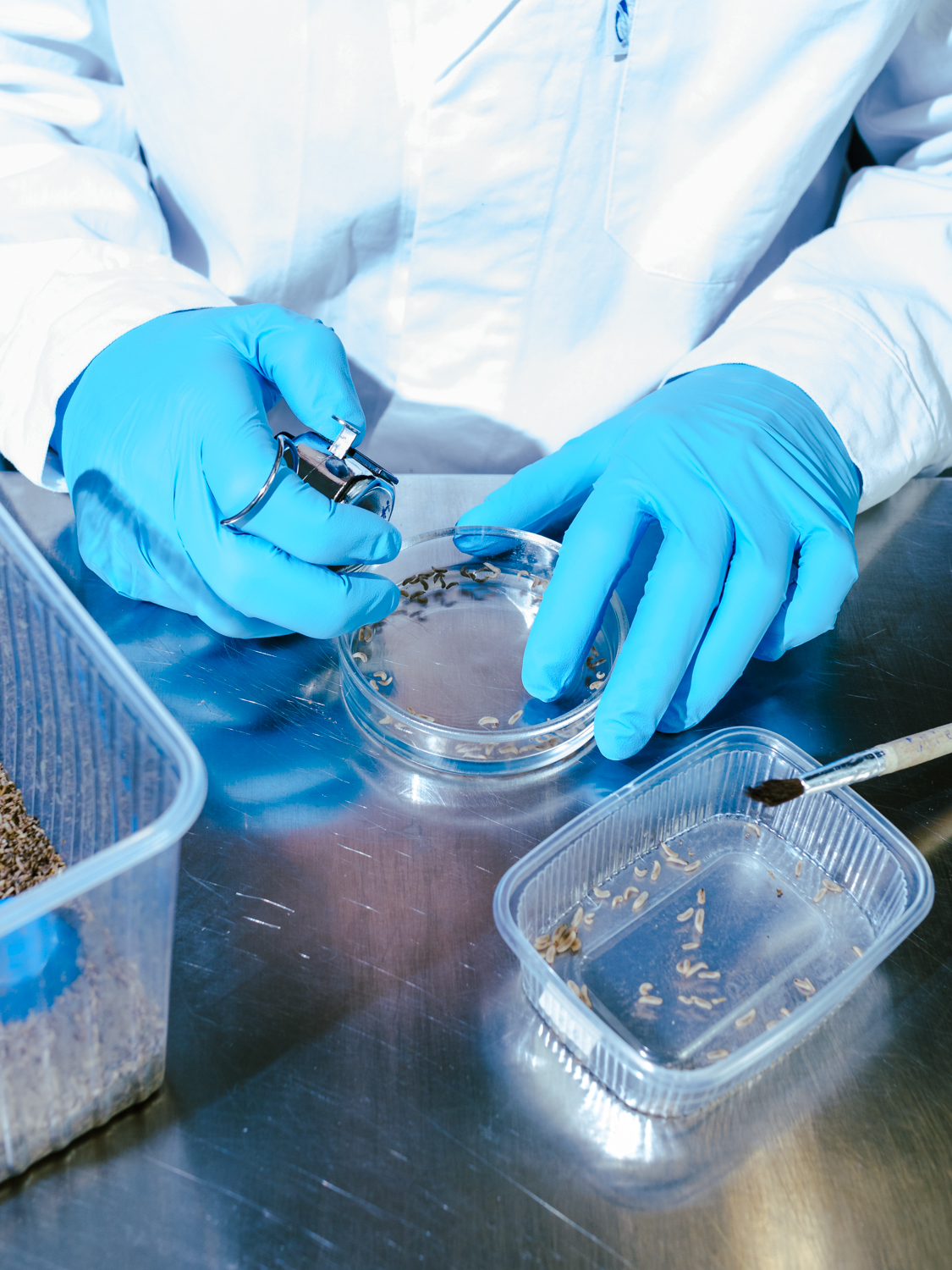 Insects as an alternative source of protein
Larvae are weighed and counted to draw conclu- sions about which nutrient sources and environment are most suitable for them. 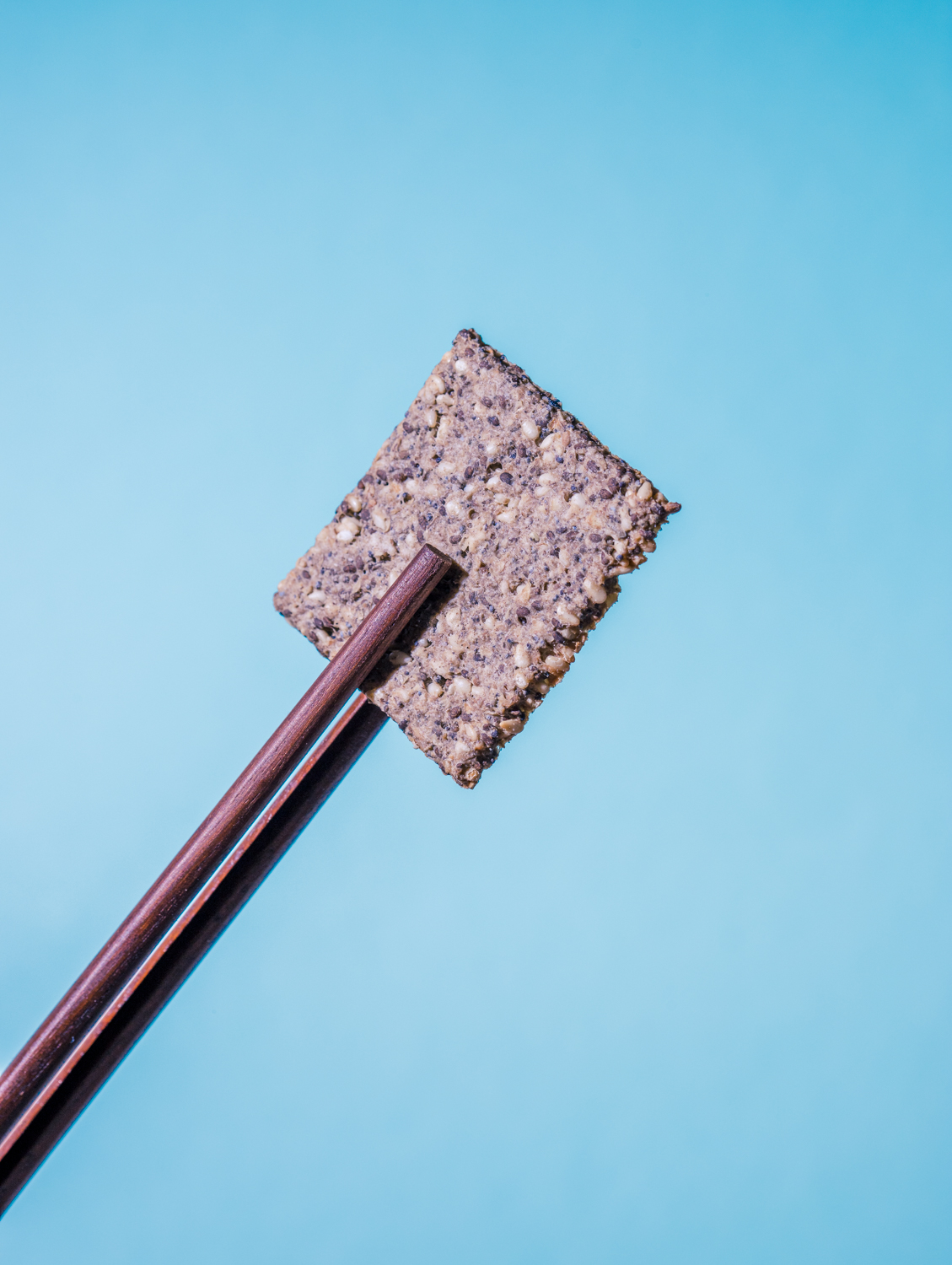 Insects as an alternative source of protein
The Berlin-based start-up „Native Foods“ is experimenting with different products based on insects. From a legal point of view, their products cannot be distributed in the EU yet. However, there is the chance the law changes before the end of 2021. 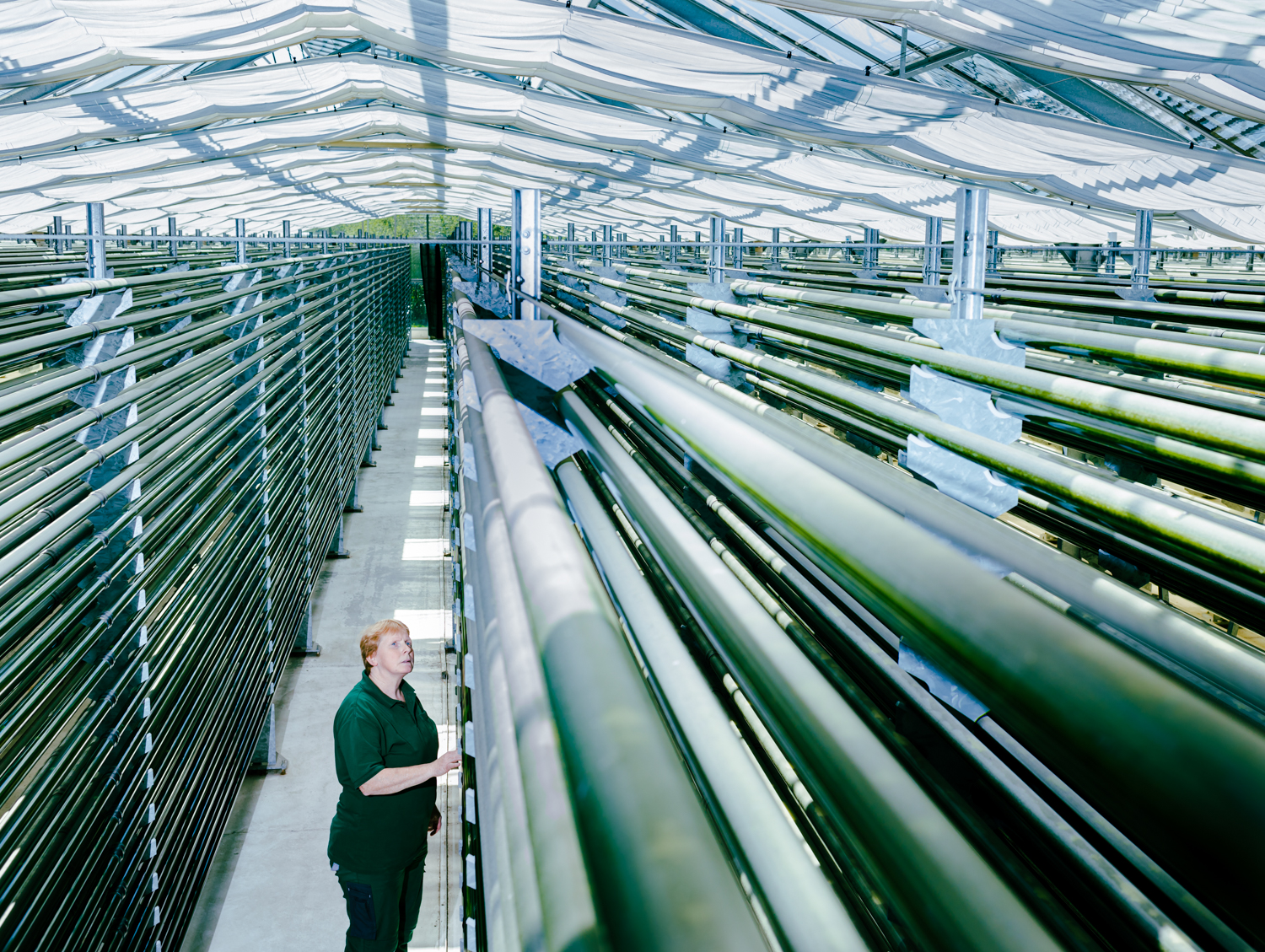 Algae as a source of protein
One of the largest algae farms in Europe is located in Saxony-Anhalt, Germany. On an area of one hectare, the green aquatic plants are cultivated in 500 kilometers of glass tubes. A conventional grain field produces between 5 and 8 tons of grain per year. An algae farm can generate up to 30,000 tons of biomass on the same area. 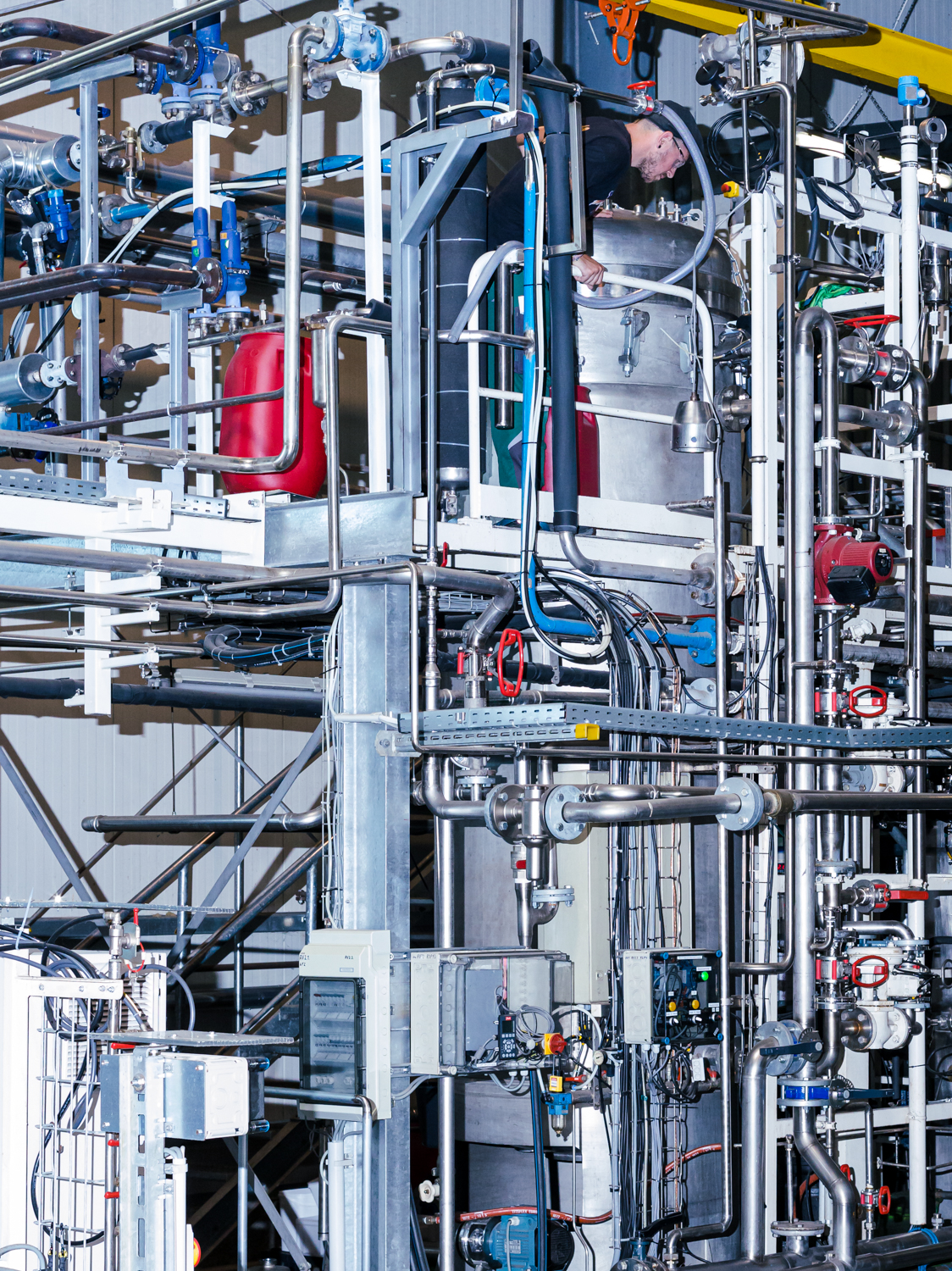 Algae as a source of protein
Before the algae are cultivated in the long glass tubes, they have to be fermented in a biore- actor. For this purpose, the company has built a fermenter that can process more than 5,000 liters at the same time. 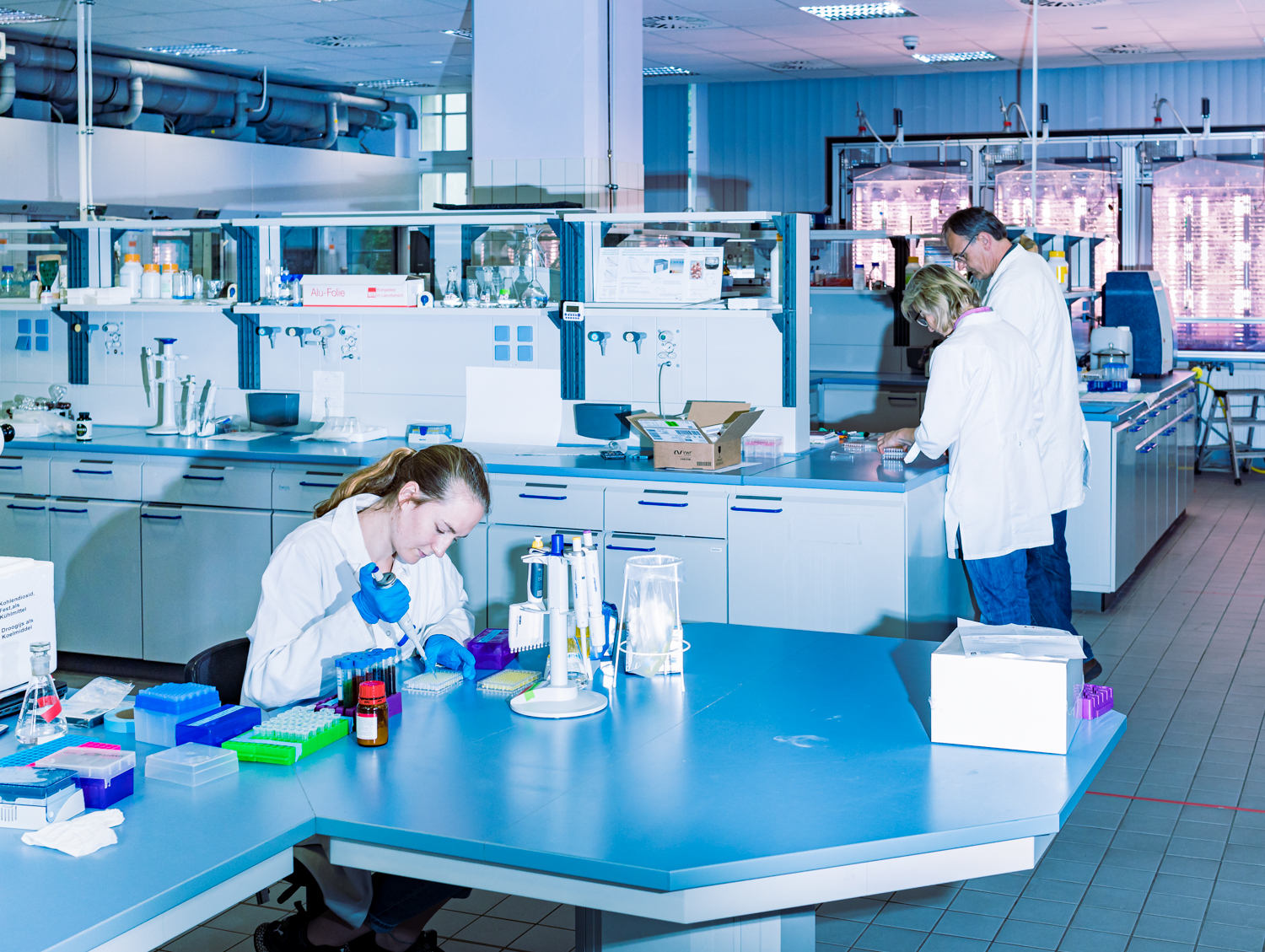 Algae as a source of protein
The Algae Biotechnology in Köthen has samples from more than 300 microalgae strains from which various proteins, amino acids or proteins can be extracted. 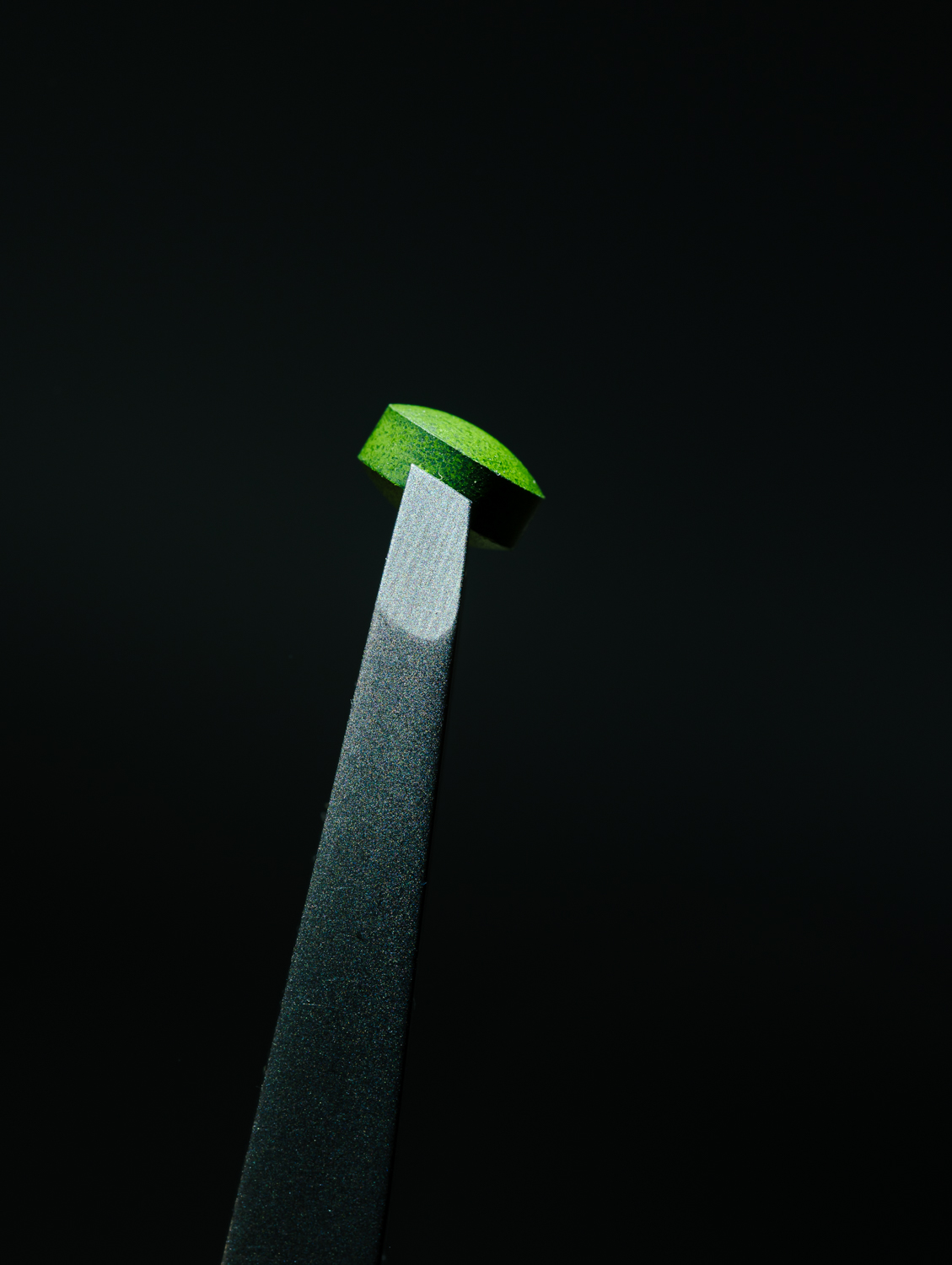 Algae as a source of protein
To grow microalgae, all that is needed is water, light, Co2 and a minimal amount of nutrients. However, they are unsuitable as a full meal for humans. At the moment they are offered as food supplements. On a large scale, however, their cultivation should help supplement livestock feed and thus reduce the use of soy in factory farming. 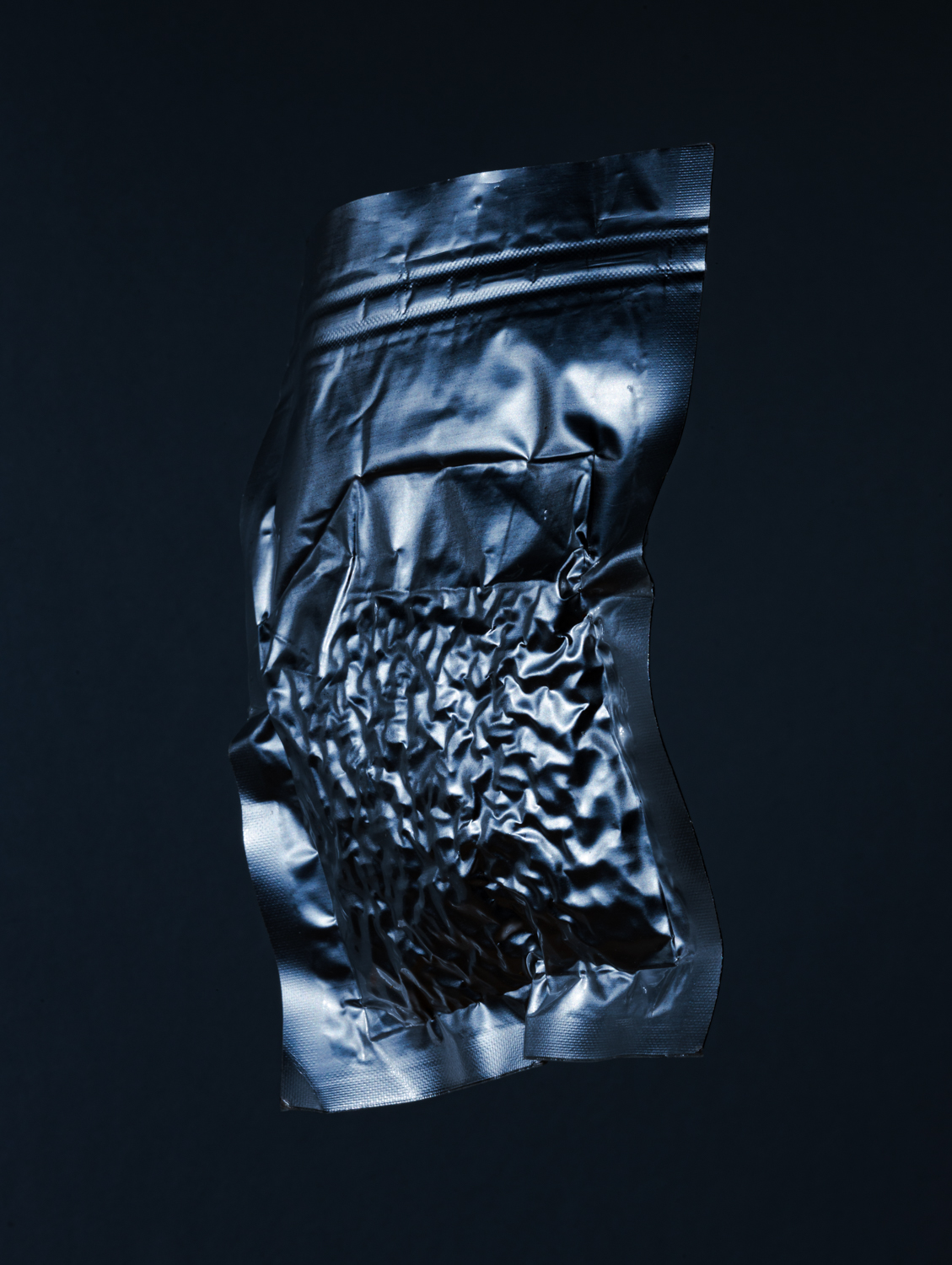 Genetic crop samples Storage
The seed storage facility in Spitsbergen „Sval- bard Global Seed Vault“ is the largest of its kind. The facility stores safety duplicates the world‘s most important crops in vacuumed samples so that they can be re-bred in the case of a global catastrophe. 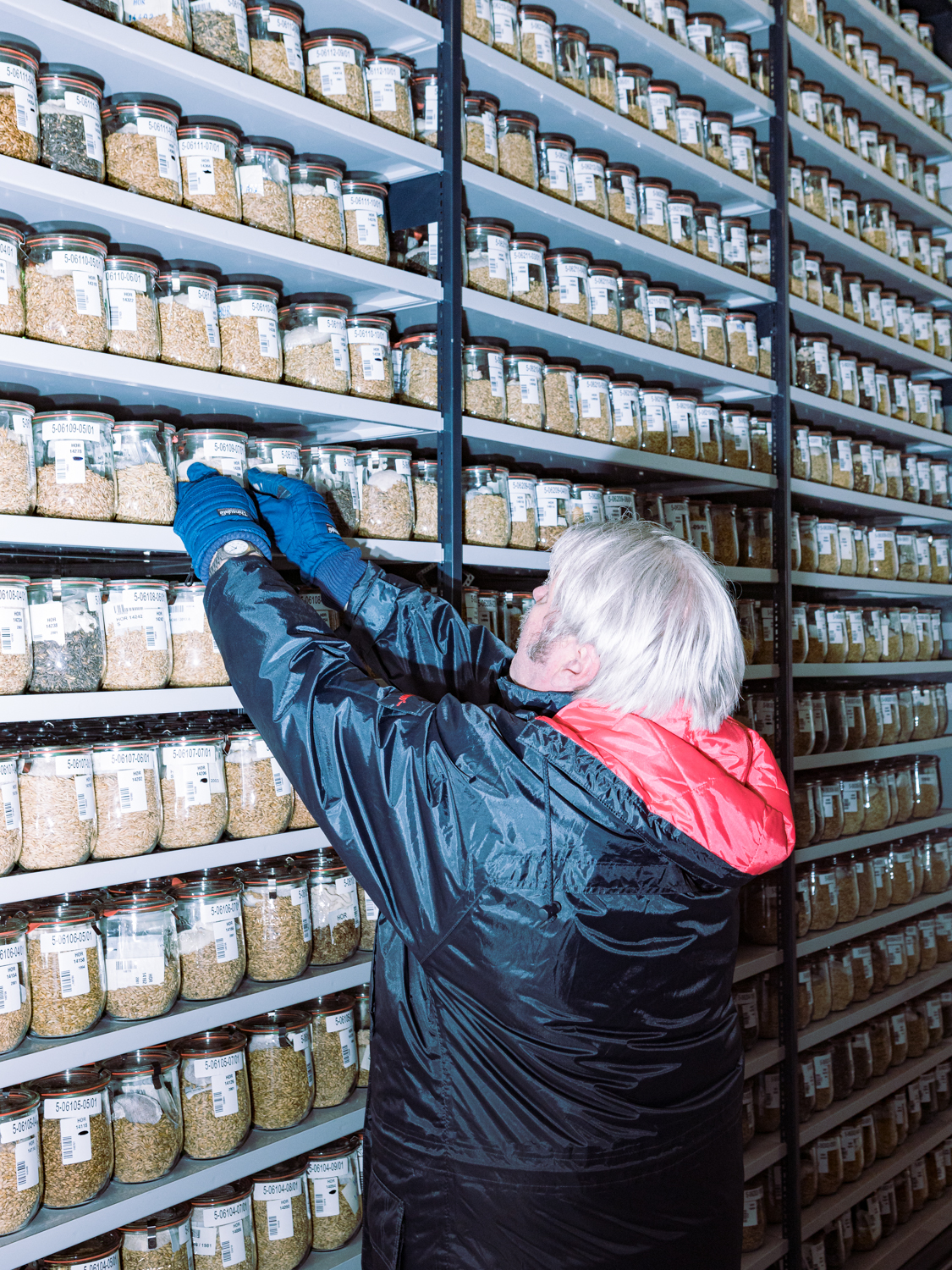 Genetic research on nutrition
Prof. Dr. Börner is head of the Department of Resource Genetics and Reproduction at the Leibniz Institute of Plant Genetics and Crop Plant Research (IPK). In the institute‘s gene database, more than 150,000 genetic samples from various crop plants are stored at -18°C. Some of the genetic material in these samples comes from plant lines that no longer exist in nature. By using modern molecular tools, the useful features of these „old“ plants could be transferred to future breeding 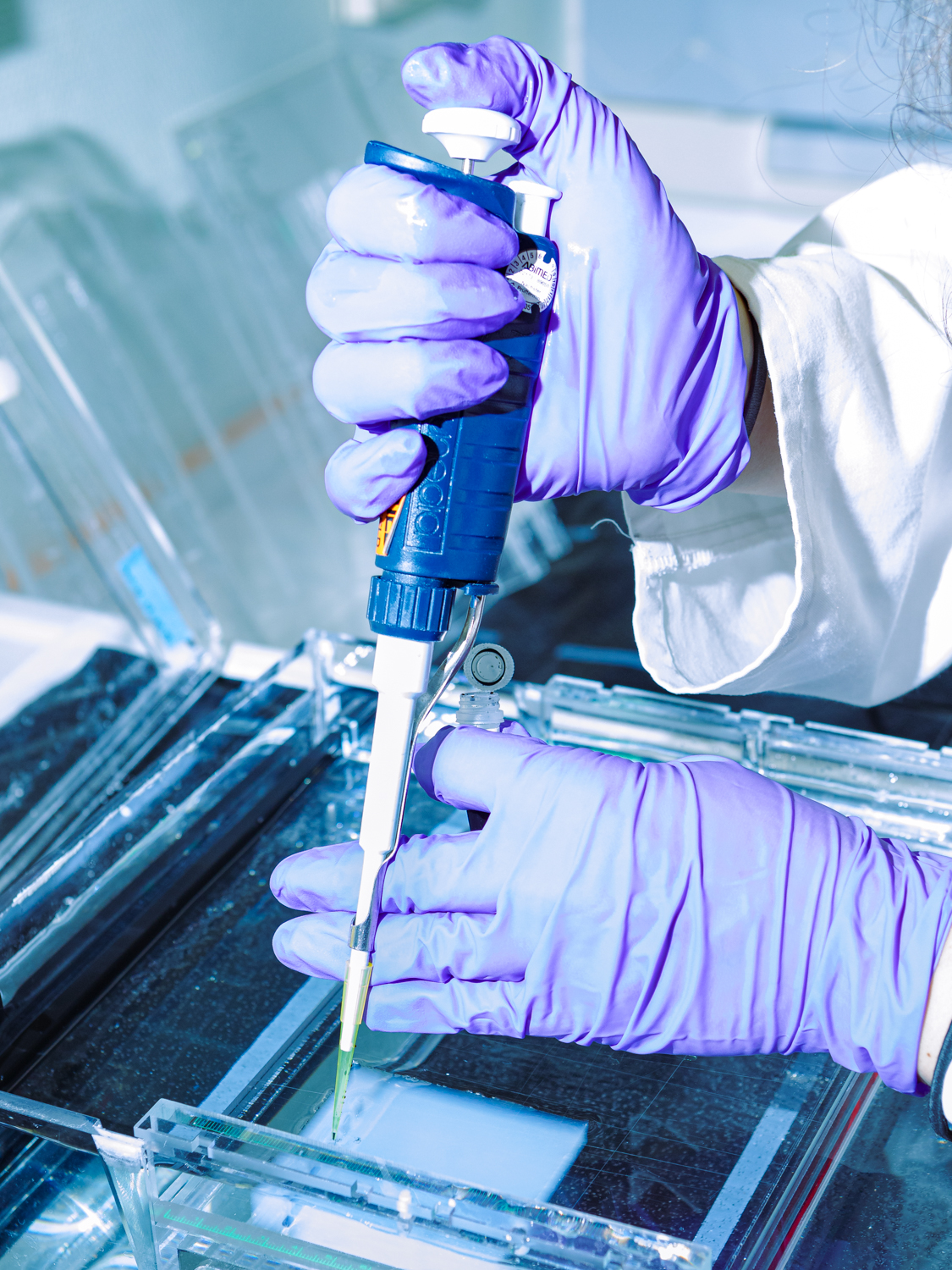 Genetic research on nutrition
The polymerase chain reaction (PCR) method makes it possible to copy and evaluate specific parts of a DNA. This method can be used to artificially transfer individual crop attributes - such as yield density or drought resistance - to other crops. 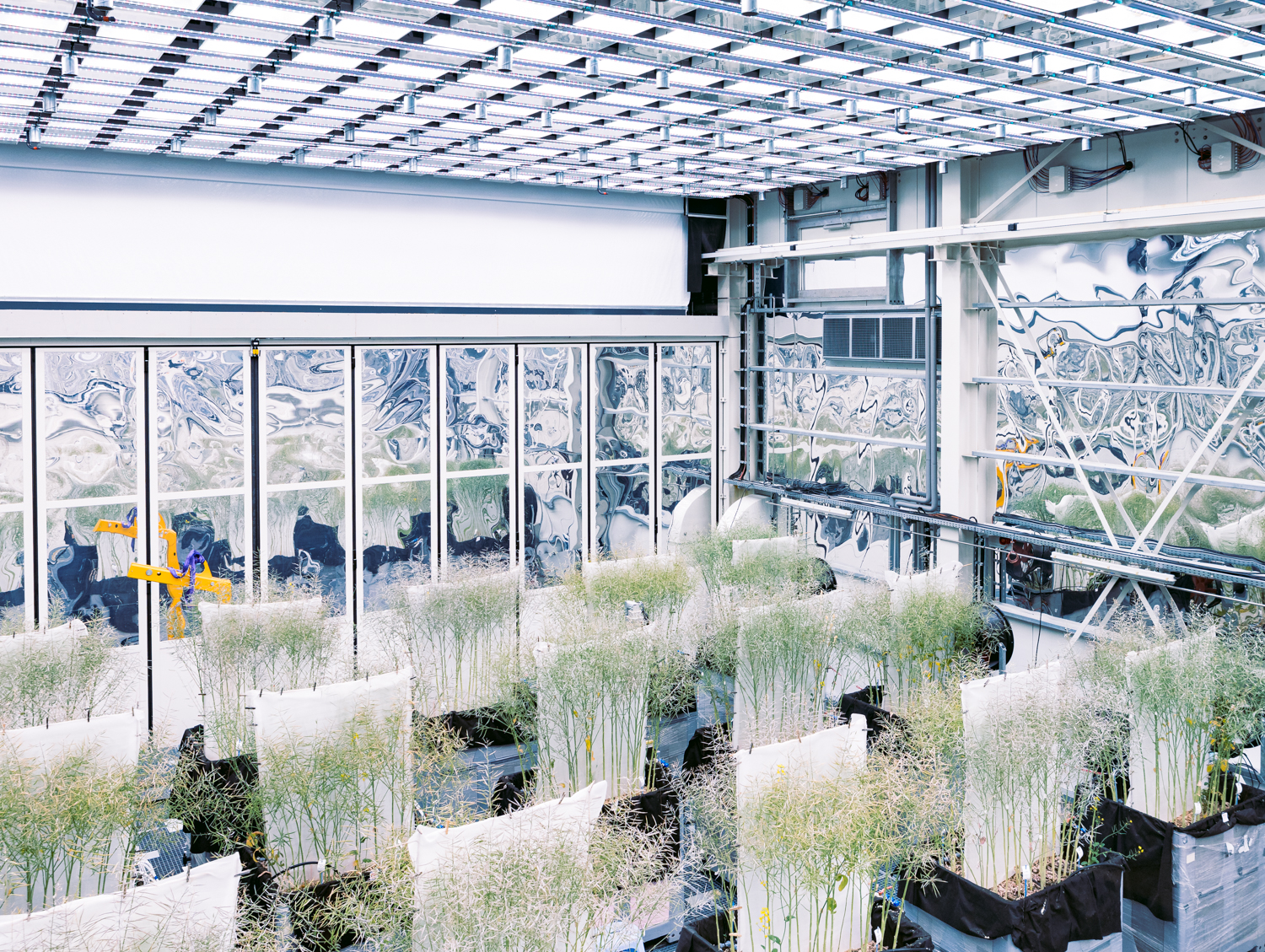 Crop research on climate change
The fully automated plant culture hall in Saxo- ny-Anhalt can imitate any climatic conditions. This makes it possible to determine how certain plant species will react to changes in the environment or the consequences of climate change. 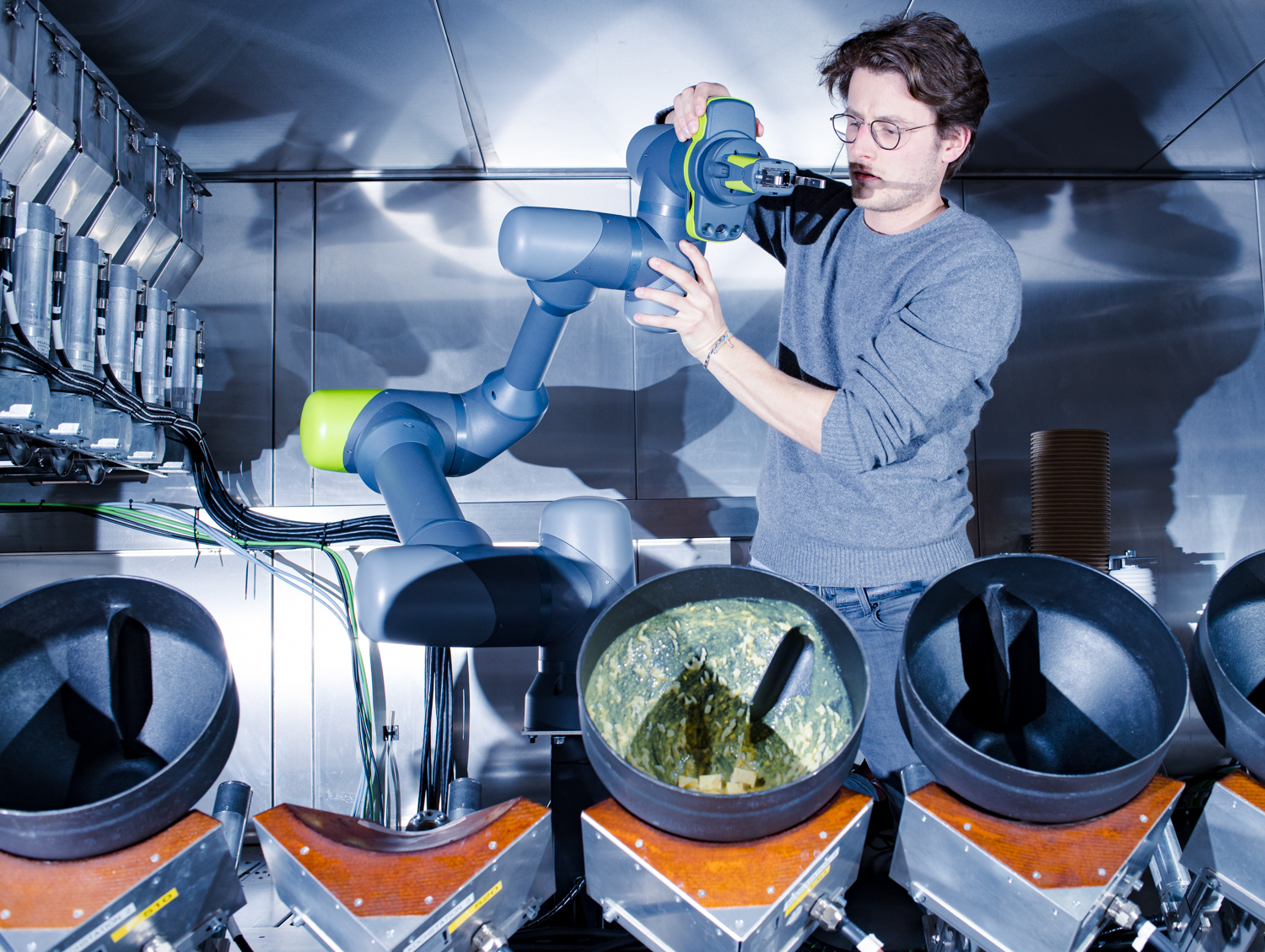 Autonomous cooking robot
The start up „Aitme“ has developed a cooking robot that can autonomously produce meals and could replace canteens in medium-sized compa- nies. Employees can pre-order dishes through an app, which the robot prepares at the specified time. This makes it possible to take into account the individual tastes, portion sizes and possible allergies of consumers. 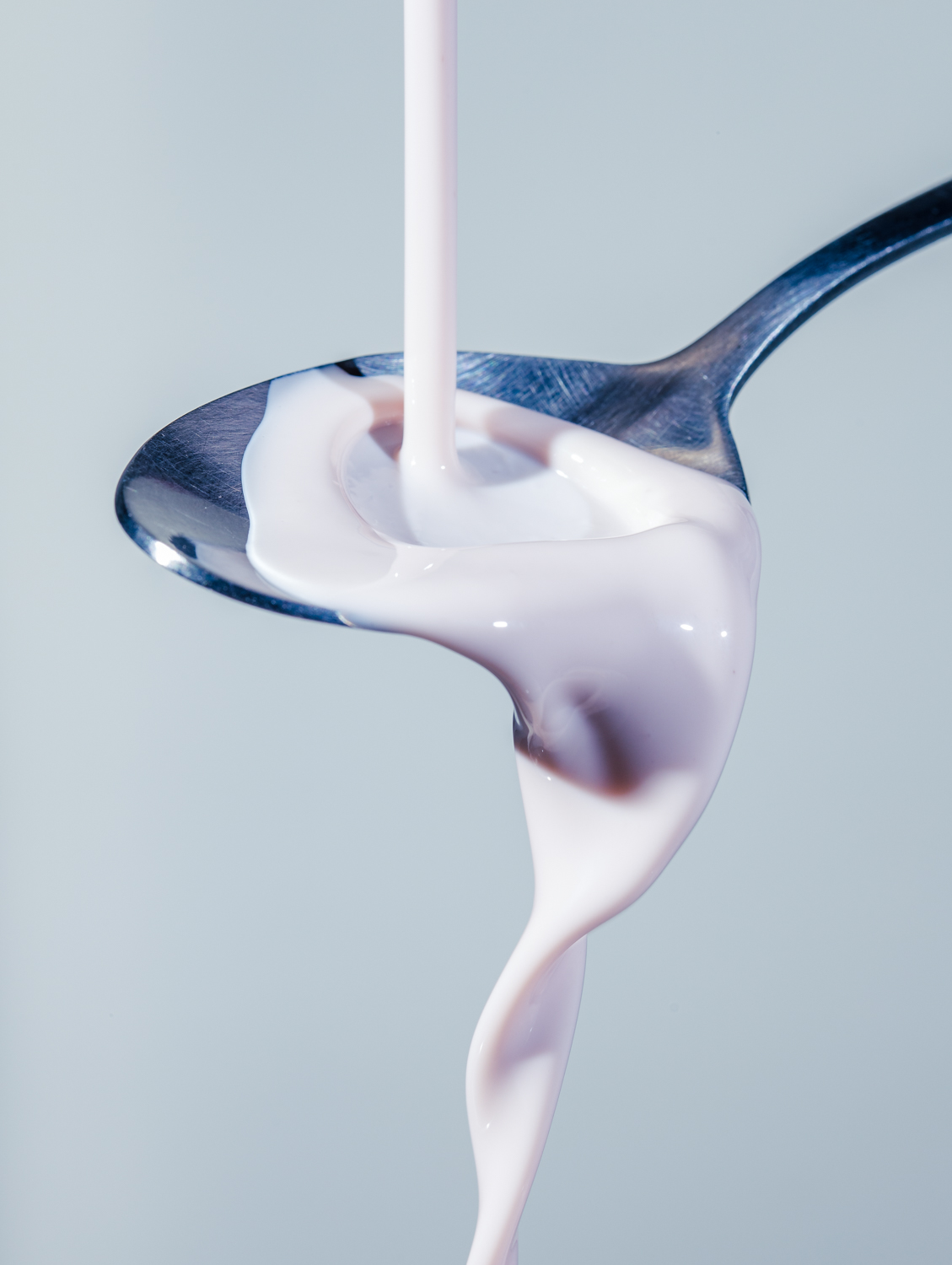 Complete Food
Complete meals in drinkable form are aimed at people who only want to spend a small amount of time eating. Suppliers advertise that their drinkable foods offer a balanced proportion of carbohydrates, fats, proteins, fiber and vitamins, thus promoting a healthier diet. The products are purely plant-based and, due to their long shelf life and precise dosage, can help to ensure that less food is thrown away. 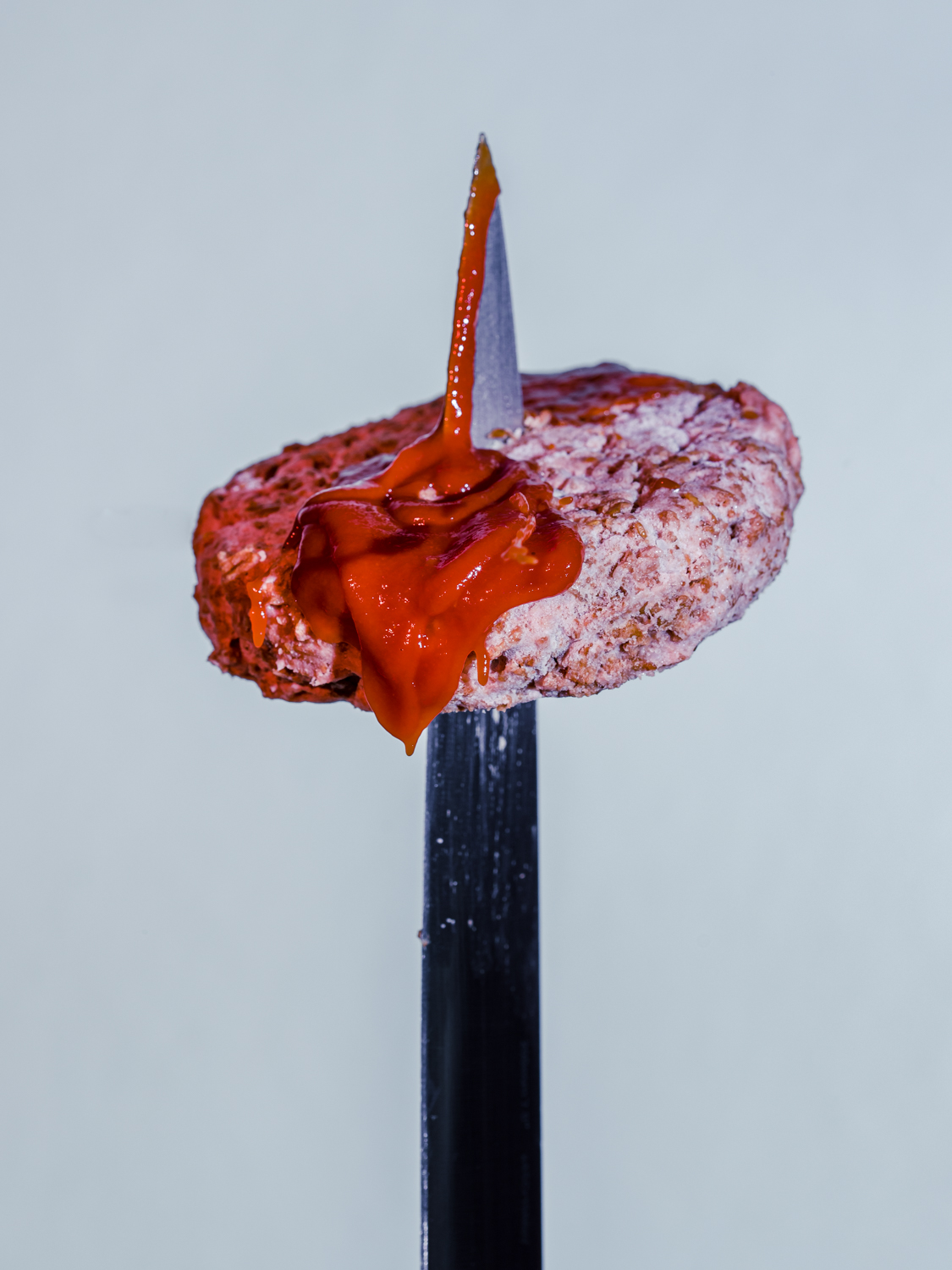 Plant-based meat substitute
The Beyond Meat Burger is considered the ultimate plant-based meat substitute. The U.S. company has developed a process in which the molecules in their veggie burgers are structured into fibers, resulting in a meat-like texture. Additionally, their products incorporate beetroot juice to simulate the impression of bloody meat.With their meat copy, the company also wants to appeal to non-vegetarians. 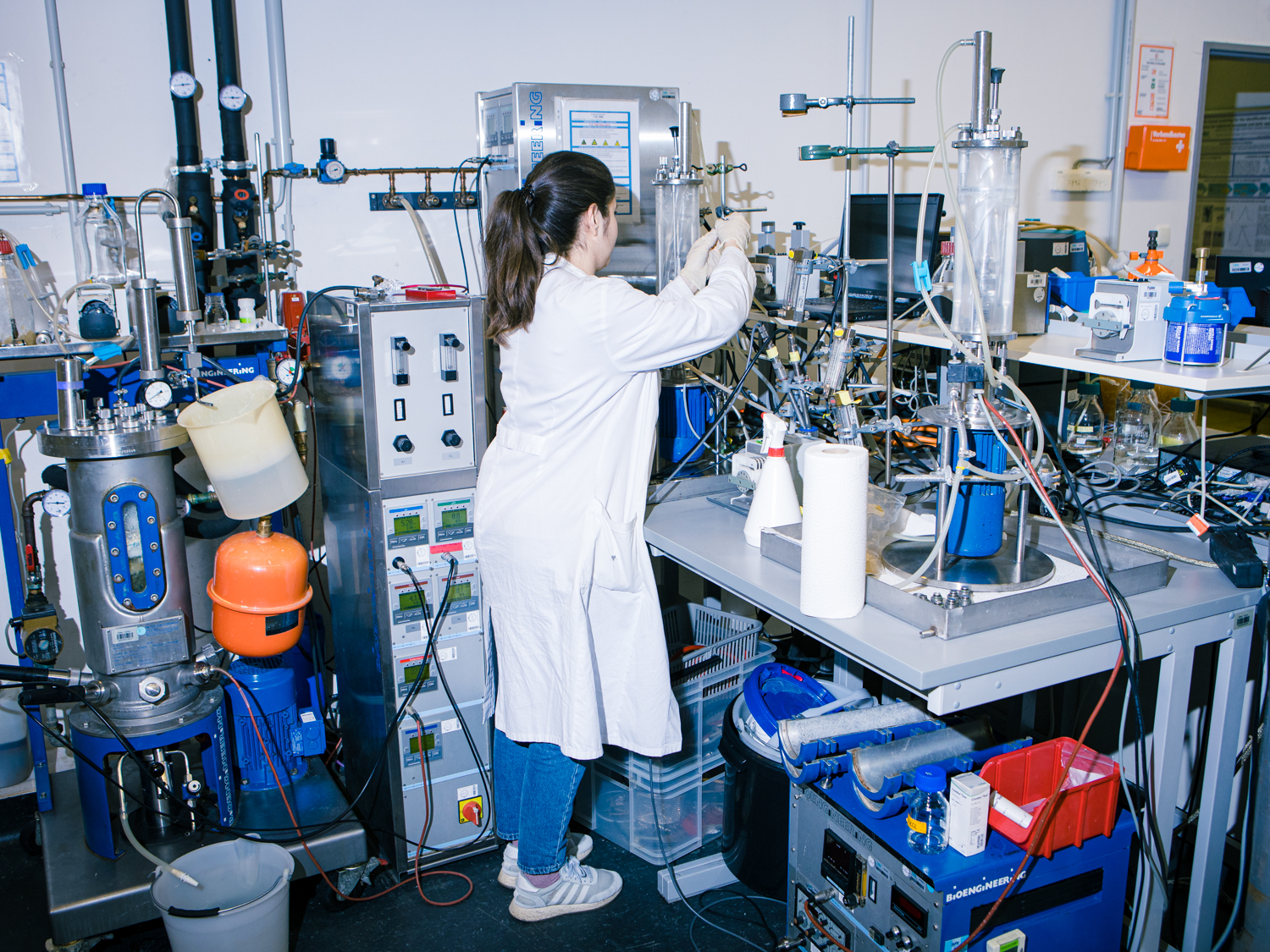 Proteins from microbial fungal cultures
In a laboratory near Hamburg, Germany, a young team of scientists is researching which fungal cultures might be suitable for alternative protein cultivation. Similar to the cultivation of insects, the fungal cultures can use biological waste as a source of nutrients. As a product, the young start-up wants to produce a meat substitute. 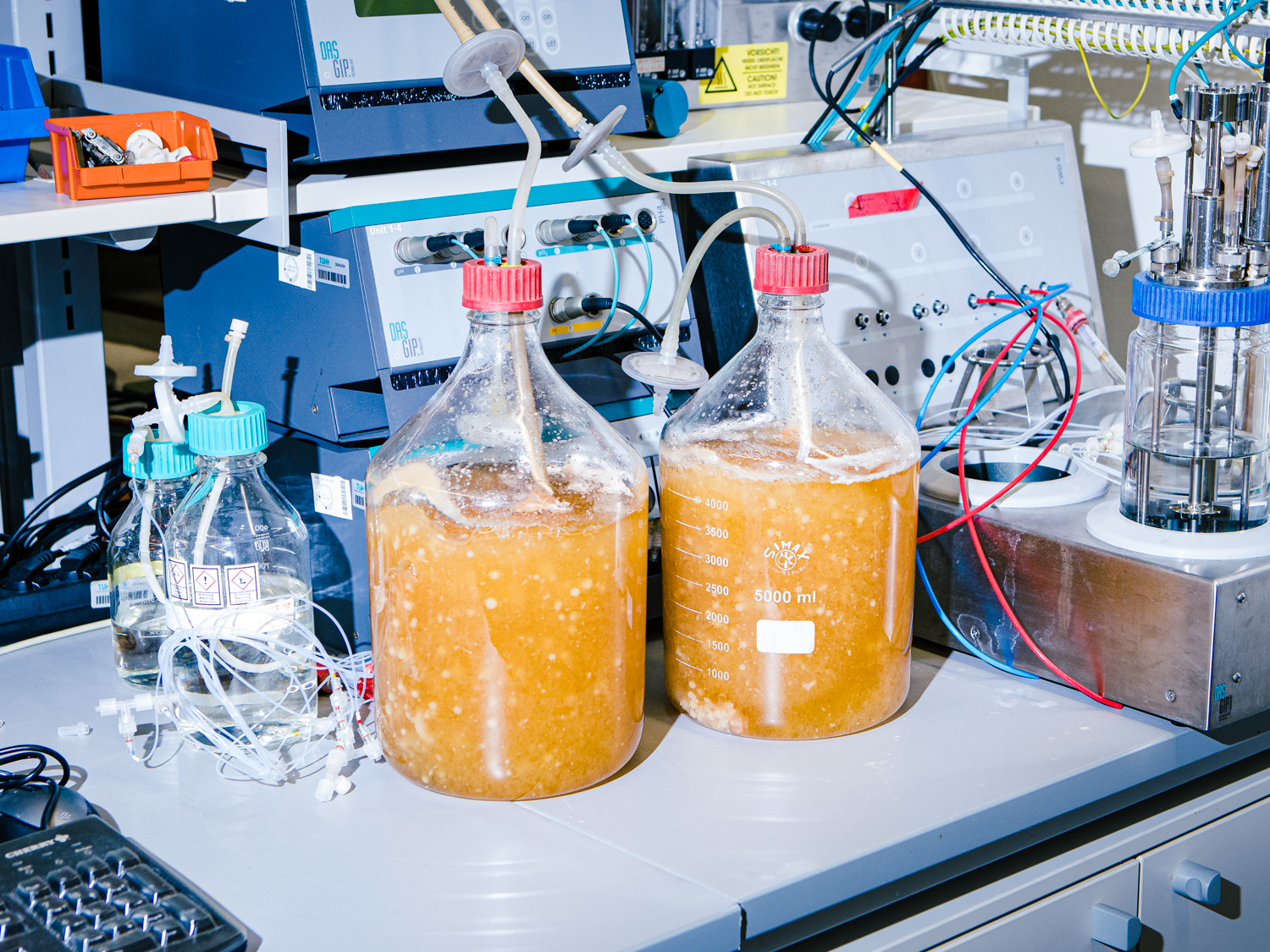 Proteins from microbial fungal cultures Compared to the production of animal proteins, the resource input of fungal cultures is very low. Some are able to use purified industrial waste gases as a source of nutrients, making their cultivation CO2-negative. 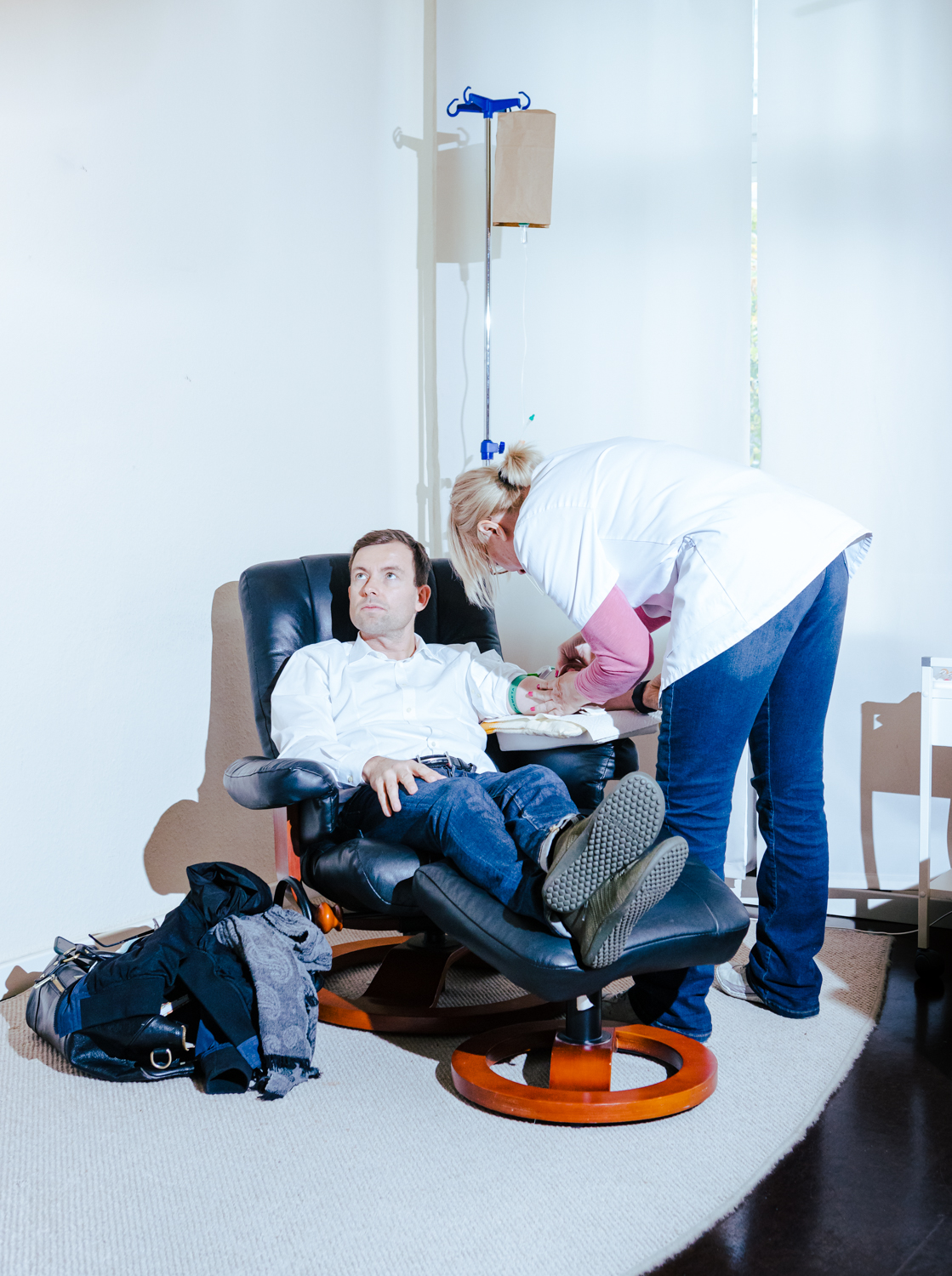 Intravenous nutrition, Berlin
A large blood count can determine which micro- nutrients are underrepresented in the human body. The vital-substance-infusion aims at optimally satisfying these deficiencies with an individually set dosage. 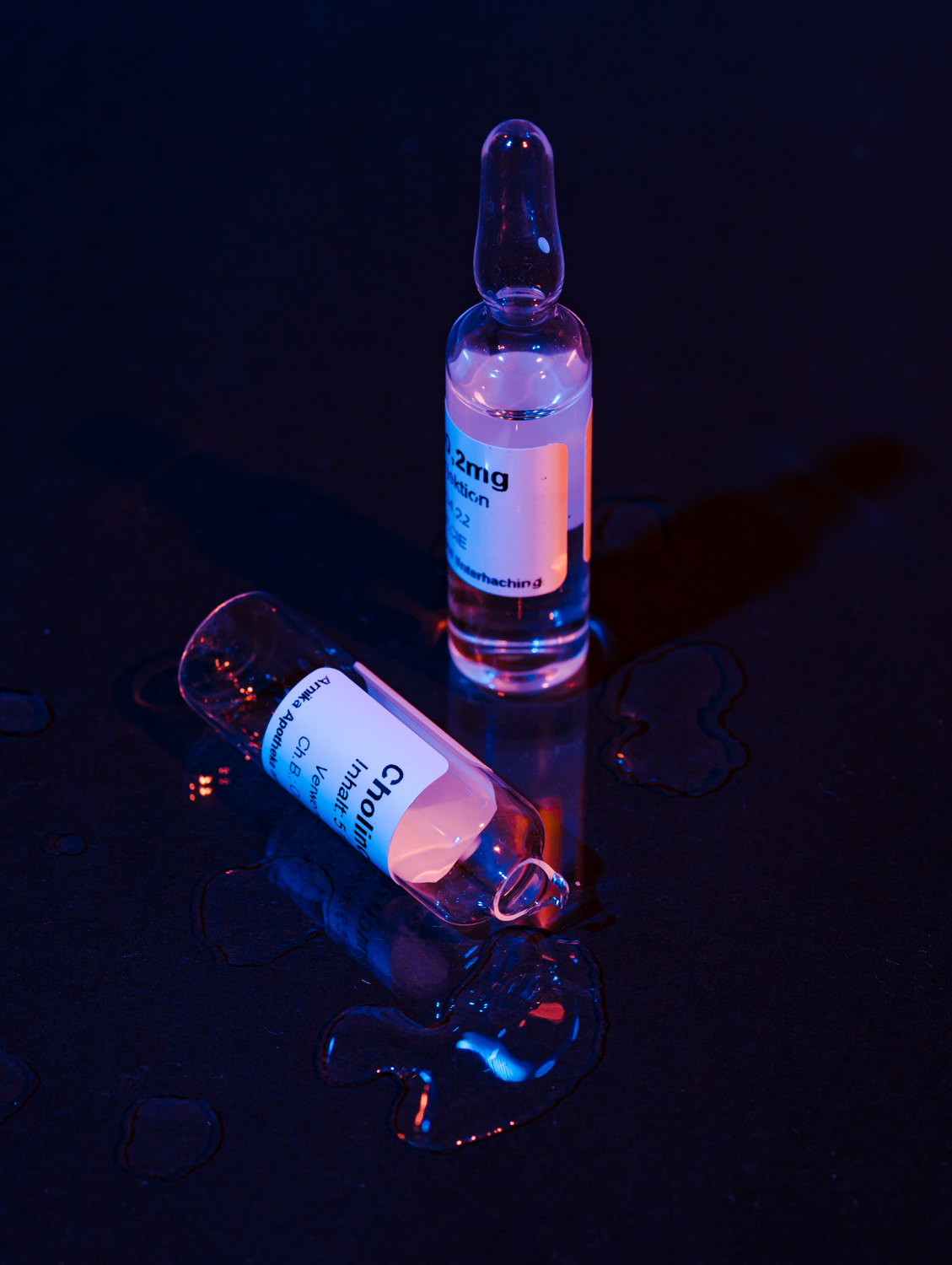 Intravenous nutrition, Berlin
In vital-substance-infusion, vitamins, amino acids, trace elements and minerals are intravenously fed to the patient. Officially, the consumption of supplemental micronutrients is considered as food and not as a medical drug. 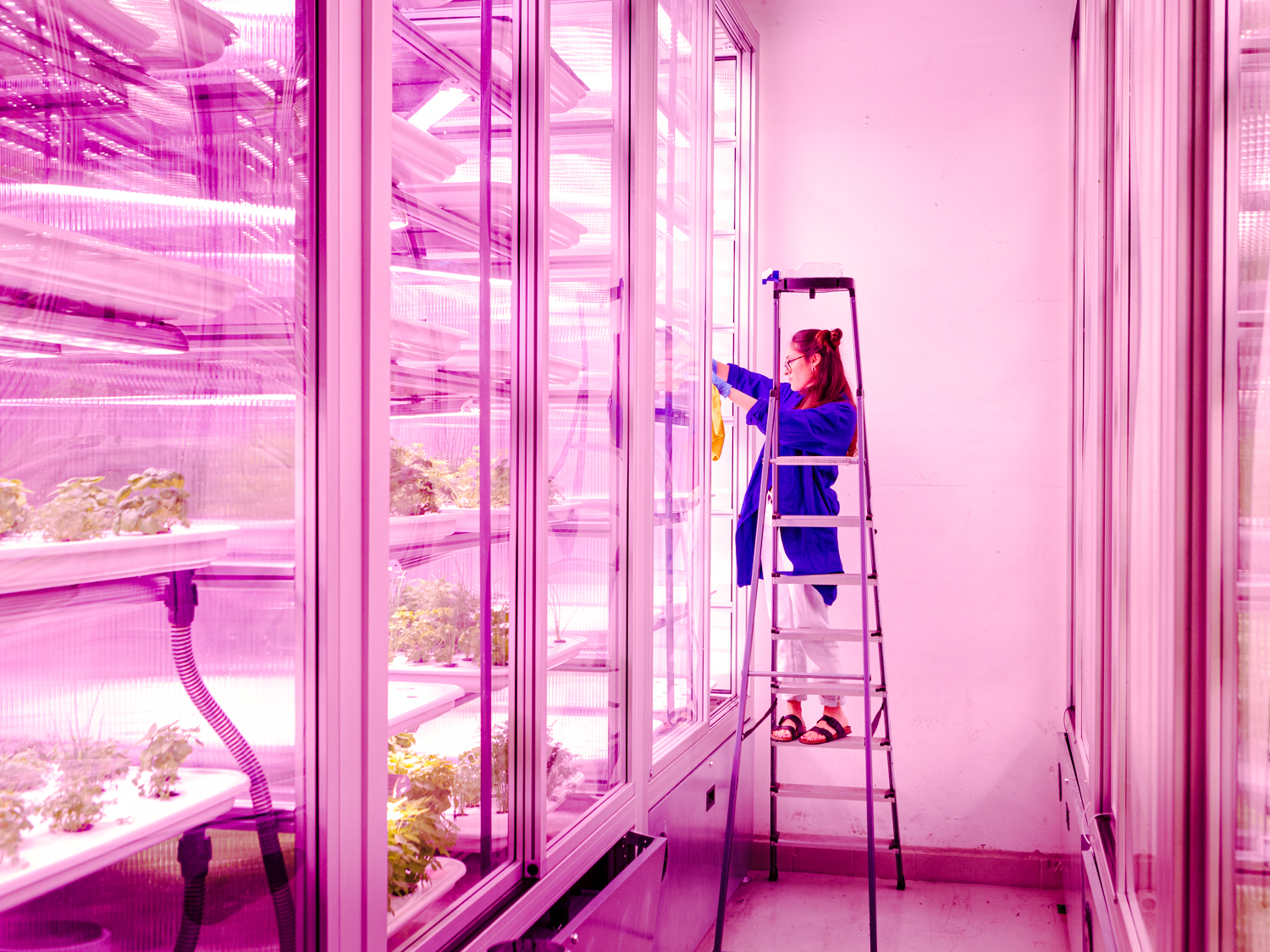 infarm, Berlin
Vertical farming systems are technologized, multi-story greenhouses that can be operated in urban areas regardless of weather conditions. They are supplied with artificial light so that they produce crops all year round. Compared to conventional farming, some vertical farming systems can produce 100 times the amount of biomass. 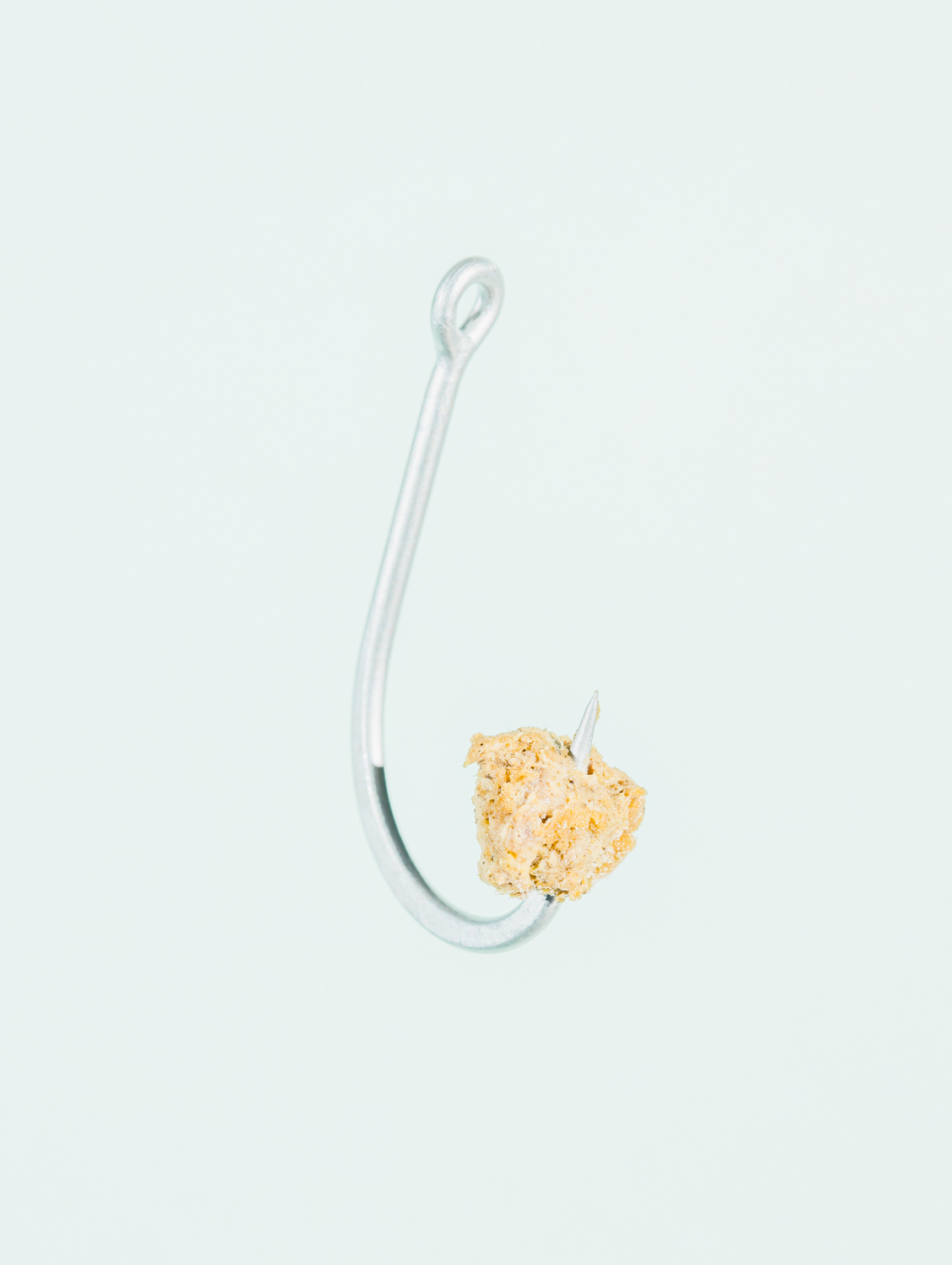 Plant-based fish replacement
The startup "Betterfish" has developed a vegan tuna based on macroalgae. The product tastes very similar to real fish and has a similarly rich nutrient profile to the original. With its fish alternative, the company aims to counteract global overfishing and build up an alternative to fishing through seaweed farms. 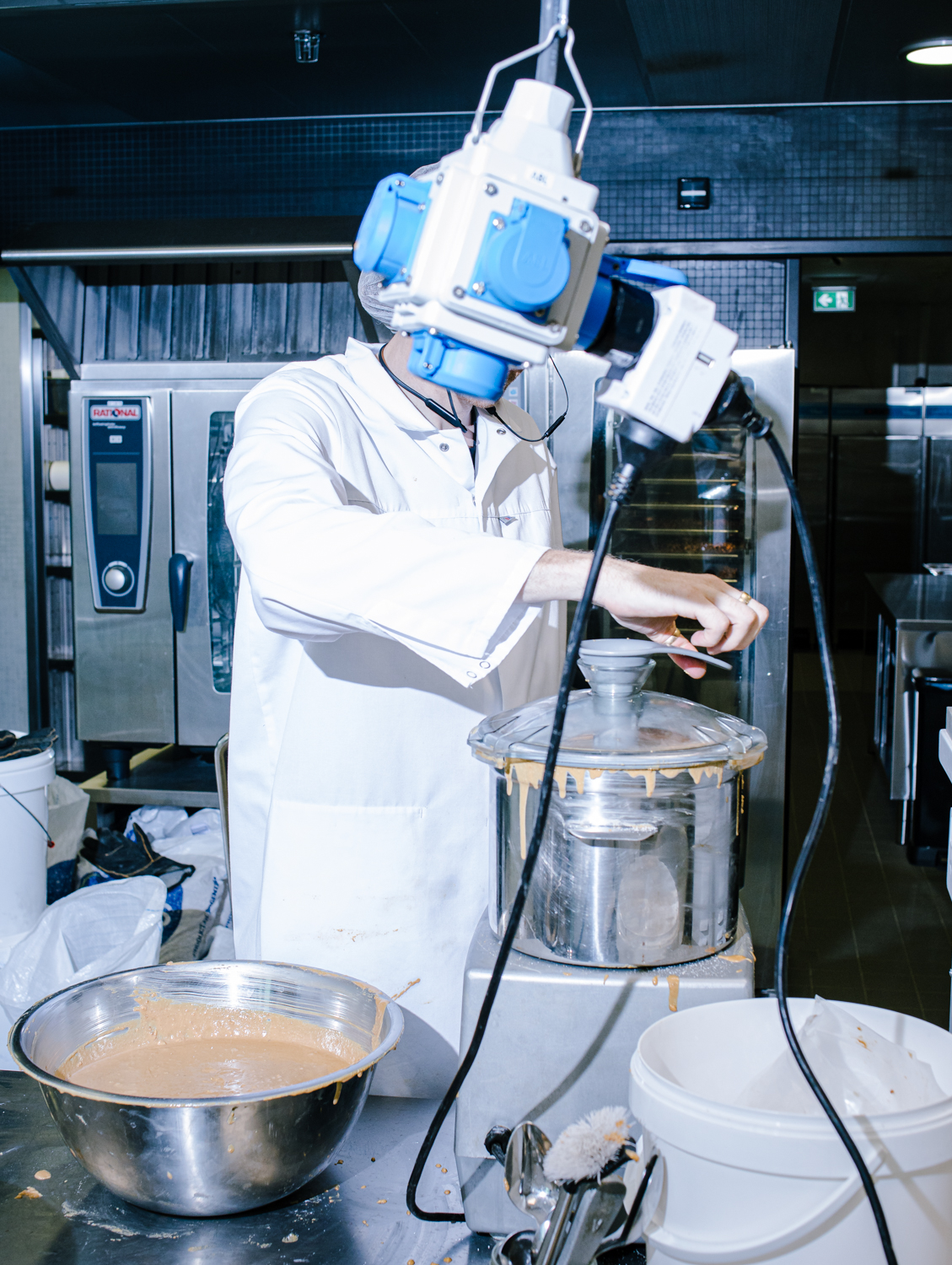 Kitchentown, Berlin
new infrastructure for food start-ups
The food incubator Kitchentown in Berlin has set itself the task of creating a technological infrastructure for young start-ups from the food industry. Kitchentown has various laboratories and kitchens to give startups the opportunity to develop and market new products with less initial capital.
error: Content is protected !!